UPD: a simpler and faster solution utilizing textureGrad instead of textureLod is uploaded (same ShaderToy link) thanks to Sergey Makeev's constructive feedback.

I haven't written here for over 3 years, and I think it's time to fix this :)

So, let's start with the problem definition. Without further ado, consider the following image (that I've stolen somewhere from the internets): 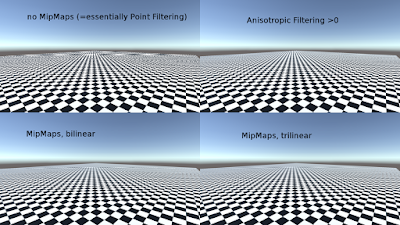 So, ultimately, we want to get as close as possible to the anisotropic filtering, but it's usually too expensive. Point filtering is way too aliased, while the classic mipmapping is too blurry in the distance.

But why mipmapping is too blurry in this case and what could be done (except expensive anisotropic filtering about it)? Well, let's consult the OpenGL Spec in order to figure out, why:


Effectively, we're taking texture coordinate gradients in screen-space (and this is, btw, the reason why rasterizer spits out 2x2 pixel quads and why you should avoid having subpixel triangles) and then taking the max between the lengths of gradients in x and y directions. Then, we convert the metric distances to mip levels by taking a logarithm (and there is a nice optimization of post-multiplying logarithm by 0.5 instead of taking a square root of an argument).

Is it good enough? For most cases, yes. However, it starts failing in our case - when a gradient in one direction, y, is significantly larger than in another direction, x. That results in selecting a higher mip level (since we take the max), hence, the blurrier result.

What do you do if you want to tolerate a bit of noise (e.g., you are planning to get rid of it later with temporal anti-aliasing) for a bit more detail? What I've seen in my practice was either introducing a mip bias, clipping the mip pyramid (i.e., having only 2-4 mip levels instead of a full mipmap chain), and, the most radical, just forcing the most detailed mip (i.e., 0).

I propose a more precise, better looking, and elegant solution. What we need to do is simply replace the max operator with min operator when we choose between x and y gradients.

Here's a quick&dirty ShaderToy demo I've made to illustrate the concept. The demo basically cross-fades between max (default) and min (proposed) mip selection. You can also try forcing mip 0 or adding mip bias to compare or other cool hacks you have up your sleeve ;)

Let me know in comments what you think!
Posted by Peter Sikachev at 1:47 PM

Peter Sikachev
Montreal, Quebec, Canada
I am currently Senior Graphics Programmer at Eidos Montreal. Views and opinions expressed here do not necessarily represent those of my employer.